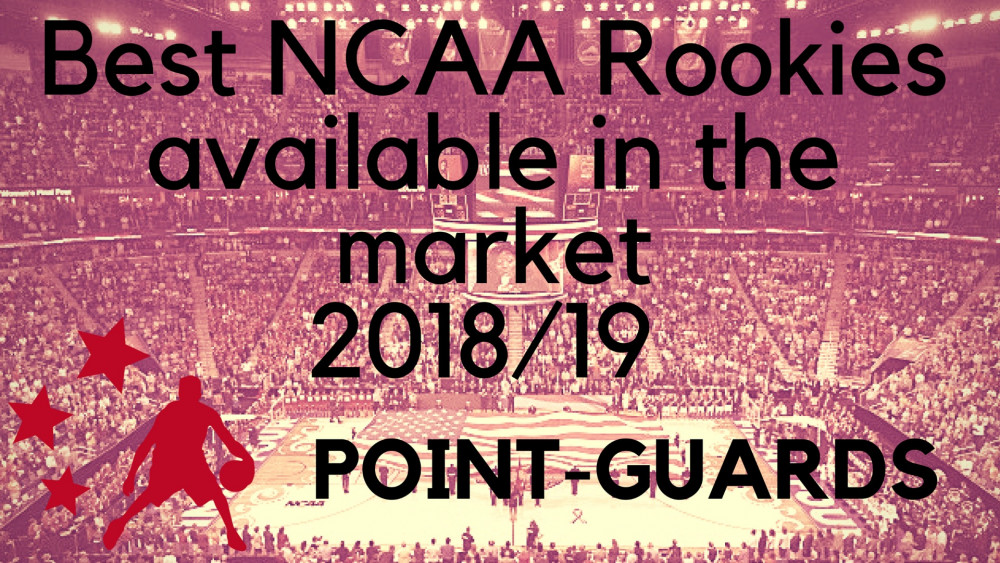 Let's start with this 1st episode: POINT-GUARDS (PG). It call our attention the high number of PGs selected in the NBA Draft, some of the we thought they'd end up in Europe. Some of them are:

Other PGs already signed their 1st pro contract overseas even before the NBA Draft:

But still a lot of interesting NCAA Rookies PGs non-drafted in the market. These are the best 5 of a long list for BPM:

We already wrote about this player in the Portsmouth Invitational Tournament article as he was one of the most outstanding players there averaging 19,3p 6.7r and 3.0a. It was a fun season in Milwaukee for Marquette fans as Markus Howard and Andrew Rowsey were one of the best duos in the country. He started college career in North Carolina Asheville and after 2 years shining, he stepped up and transferred to a better program such as Marquette. After sitting season 2015/16 due to transfer rules, his first season (Junior season for him) with the Golden Eagles was not as expected but he bloomed last season as a Senior. Outstanding PG as a playmaker but also a great and quick shooter, mostly from the three point line averaging close to 4 threes per game with a 41.5%. He is a headache for the rival defense. He is also outstanding from the free throw line averaging 90.2% last season. He'll try to get a spot in the NBA playing for Toronto Raptors the upcoming NBA Summer Leagues.

Farrell is a great example of perseverance and resilience. He was lucky, and at the same time unlucky, to share locker room with Demetrius Jackson during his first two seasons in South Bend. Lucky because Jackson was a great mirror and leader, but unlucky because when you play PG position and your competence is a guy such as Jackson, you are not going to have too much opportunities and minutes. During those two seasons Matt played 4.1 and 13.4 minutes per game. In the other hand, as a Junior, once Demetrius Jackson left the team as he was selected in the NBA Draft, Farrell increased his presence on the court and averaged 34.4 minutes per game. The funny ting is that he was about to transfer if Jackson would stay in the Fighting Irish for his Senior season. Strong, very good on defense, He also played the PIT we saw mostly his playmaker version (12.0p 3.0r 5.7a). He can score though. He is pretty good shooting after dribbling, great ball handler, very good playing pick & roll and high IQ reading the best option for the team. He'll play for Miami Heat in the NBA Summer Leagues.

He also played the PIT and did it pretty good (14.0p 4.3r 4.7a). Being the orchestra director of the Bonnies, one of the big surprises this season in the league as well as Rhode Island belonging to a mid-major conference such as the Atlantic 10, they achieved 25-7 after regular season and Conference Tournament where they surprisingly lost in semifinals against Davidson. They were invited to the March Madness in the Selection Sunday though, and they got rid of UCLA in the First Four, but lost in First Round against Florida. Adams has been the engine of this team in a huge season for him. He missed the first 6 games of the season due to an injury though. Good size for his position, he feels very confortable playing pick & roll and generating his own points, mostly scoring in traffic after dribbling as he is an outstanding slasher. He is not a quick shooter but with room and time, he is very effective from the three point line as well, actually, from the NBA range. Jaylen has been offered the chance of playing for Atlanta Hawks in the NBA Summer Leagues.

Although he played the PIT, he didn't show his best skills. Belgium native and already member of the National Team, he started his collegiate career playing for Jim Larrañaga in Miami Hurricanes where he stayed a couple of seasons but then transferred to Waco and played better seasons as a Junior and Senior for Baylor Bears. Rather a combo than a true PG but his size will make him play PG in Europe, he is a clutch player who asks for the ball in the final moments of the game when nobody wants it. He plays really good without the ball seeking screens to catch and shoot or catch and drive. Very explosive and sharp. Defensively is very active and quick hands. One of his advantages is that he does not need to get used to european basketball or culture.

This tiny PG has been one of the most outstanding graduate transfers this season. He started to bright in Long Beach State excelling at breaking defenses to create open shots for teammates. He graduated in just 3 years at Long Beach State and decided not to stay with the 49ers one more season after a dissapointing 2016/17 season losing 19 games. Huge acquisition for the Utes where he could keep growing and showing what he was able to do. Very fast and explosive, always with an eye looking to best positioned teammates. But also very good scorer and always finds room in traffic, great driving the fastbreak, and also pretty good organizing transition and static offense. Really efficient from the three point line (43.9% last season) and from the free throw line (87.4%).