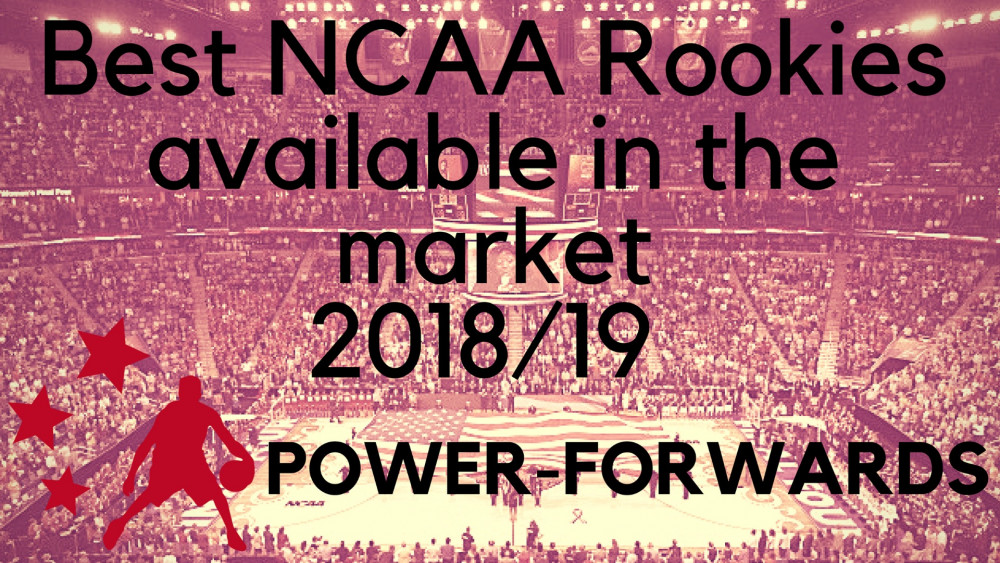 So far, we've introduced you through 3 articles, the following positions:

Today in this 4th article of the series, ew introduce you one of the most demanded position: POWER-FORWARDS. There are some PFs that already signed their first pro contract. Some of them in Europe:

But still a lot of interesting NCAA Division I PFs rookies non-drafted in the market. These are the Basketball Player Media Top 5 Power-Forward selection.

Four seasons playing for Davidson, 4 years learning from Coach Bob McKillop. Atlantic 10 Co-Player of the Year last season, Atlantic 10 Tournament Most Outstanding Player, Atlantic 10 All Tournament Team, NABC All District, AP Honorable Mention All America, 2018 Reese's All Star, 5-time Atlantic 10 Player of the Week... All of that just during the 2017/18 season. He also played The Portsmouth Invitational Tournament (PIT) where he made pretty decent numbers: 13.0p 5.3r 3.0a. He can do everything: he can shoot from mid-range as well as from the three point line, he can make those shots either after playing without the ball to catch and shoot or after dribbling. He can play in the post. He is aggressive with the ball and also in defense, huge hustle, hard worker and great passer for his size and position. No doubt he has a 100% Europe profile to succeed overseas. Now playing the NBA Summer Leagues with Utah Jazz.

2018 Patriot League Player of the Year, First Team All Patriot League and Patriot League All Tournament Team during his Senior season. Combo Forward that can play PF and SF. He is tremendous offensively and one of the best players in Bucknell history. Fast enough to play SF, and good size to play PF. Great ball handler that allows him create his own shoots after dribbling as he also has a great and quick shot mechanic (and effective). He is a fade away master. And don't forget he is terrific grabbing boards. Also playing for Utah Jazz the NBA Summer League but in the same way than Payton Aldridge, lacking of minutes, so his next stop is more likely to be overseas.

From Slovakia, so more attractive for European clubs. Former Canarias Basketball Academy player arrived to USA playing for Pratt Community College, in Kansas, and after just one season averaging 15.3p 8.8r, he transferred to Texas Christian to play the three years of eligibility left. He did good in Fort Worth, mostly his Senior season when he was included in All-Big 12 Third Team, AP All-Big 12 Honorable Mention and selected to play the Reese's College All Star. Long, very long player and very skilled and talented at the same time. He is skinny but learned how to use his body around the rim. He also worked a lot in his mid range shoot. He scored 25 points playing against Mo Bamba, one of the emerging stars and one of the most hyped players in this NBA Draft. Played the PIT averaging 8.7p 7.3r and leaded the Tournament in blocked shots per game (2.3). Now playing with Cleveland Cavaliers the NBA Summer League.

He was considered the new Charles Barkley: very undersized PF, tremendous rebounder, and using his body to build his own baskets close to the rim. His individual season was great but Notre Dame was a little bit disappointing as we expected more from them. Included in the 2018 ACC All Tournament Second Team. He worked hard last 2 seasons improving three point range, and he got it and it's going to be very useful for him playing pros, but where he feels more confortable with, is playing around the basket, post moves, fading away, using his pretty decent mid-range shoot, or using just one hand. He has a magnet in his hands that attract most of the boards. Didn't play the Portsmouth Invitational Tournament nor the NBA Summer Leagues, so looks pretty obvious that he'll end up in Europe.

It's been a long time since we don't see a player who uses his body so good to create room as Shaquille Morris does. Every single college season averaging over 52% in field goals, never a bad selected shot, always taking advantage of second options, and this last season, even creating his own baskets as a first option for the Shockers. Big body, strong, very good defender (Frank Marshall school). He is going to succeed overseas because of his balance between offense/defense. He is terrific setting up screens either ball screens or indirect ones. As well, he plays pretty good either pick and roll or pick and pop, as he worked a lot in his mid-long range shoot and now he is more versatile than 2 years ago. Huge body volume, but also long arms and good timing for blocking. Played the PIT averaging 10.7p 3.7r. On the other hand, he had not offers to play the NBA Summer Leagues.