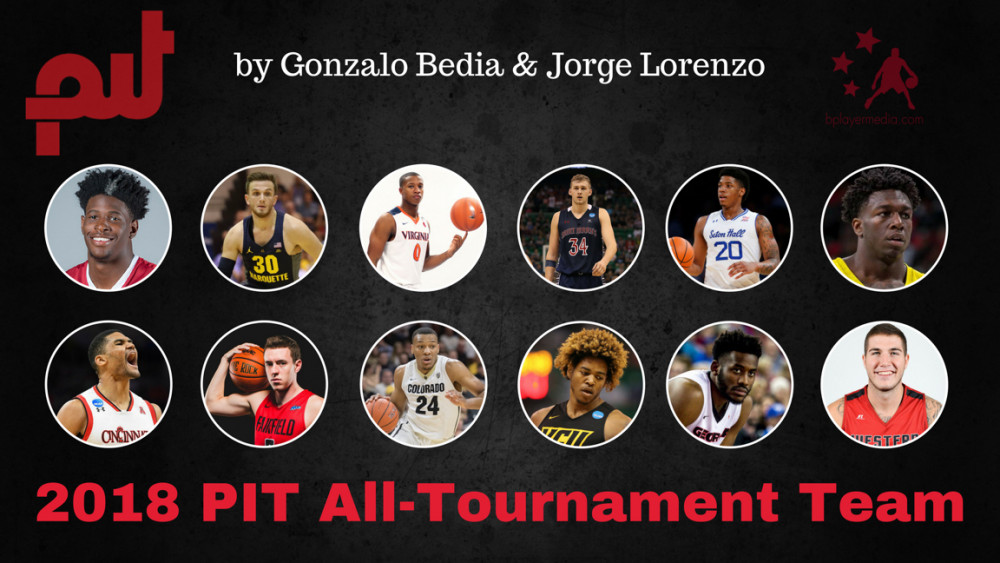 Year after year, the Portsmouth Invitational Tournament (PIT) increases status, not just at Europe level but also NBA level as every year there are more and more players who are invited to NBA pre-draft workouts after playing the PIT and also, some of them are picked in the NBA Draft.

Scouts from Europe and rest of the World travel to Norfolk, Virginia, to be able to watch live potential signings for their teams, players who just finished college career at high level, but not enough most of the times for the NBA level.

Matt Stainbrook now playing for Breogan Lugo (LEB Oro/Spain 2nd Division), O. D. Anosike in Real Betis Energía Plus (ACB/Spain Top Division) and other names who shined such as Scott Wood when he was at UCAM Murcia. Those are some examples of PIT players. A great event, maybe the best one, to find the best NCAA Rookies.

During 5 days of last April, the 2018 PIT was played and we want to highlight the following players:

He was named PIT MVP. He shined very brightly in Norfolk improving his numbers in regular season with Arkansas Razorbacks where he played the last 2 seasons and previously played JuCo for Motlow State Community College. Second best scorer in the PIT, he is outstanding for being sharp and having great body-control when he drives to the rim. He is even more dangerous when he has the ball in his hands taking advantage of his power. He has a balanced game as he can also shoot from long distance and actually he have over 40% from the three point line in his Senior season in NCAA, among the Top 5 in threes scored in the PIT (2.7 threes per game) and Top 20 best three point percentage (38.1%) in the Tournament. He is not a pure shooter, but he is a threat from long distance so the guy who is guarding him can not allow too much room to him, as he can punish his rival in other parts of the court. He was invited by Utah Jazz to attend the pre-draft workout of the franchise and also attended the NBA Combine.

He's been one of the great sensations this season in the city of Milwaukee. Marquette fans enjoyed one of the best and most talented duos of the country and also one of the most amusing ones. The duo Markus Howard and Andrew Rowsey. After shining 2 seasons at North Carolina Asheville, he transferred to Marquette, a better athletic program. He sat during 2015/16 season and could play the last 2 years of eligibility for the Golden Eagles, and no doubt, he did not disappoint. Outstanding PG as a playmaker but he is also a great and quick shooter mostly from the three point line. He is a headache for the rival defense. Among the Top15 scorers in the PIT, Rowsey also shined among the best passers of the tournament (fifth best in assists). He is very effective from the free throw line scoring over 90% in his last season in NCAA, and 89% in Norfolk, but also pretty good percentage from the three point line.

Devon Hall is one of the most important pieces in Tony Bennett's puzzle, in that Virginia sticky and deranged defense. He's been revalued after playing the PIT and increased his hype because there is more free style play and you can show more offensive skills in Norfolk Tournament. Hall has been outstanding as a huge scorer finishing among the Top 10 of the Tournament and the best one in effectiveness from the three point line. But the best part of his resume is that he's been playing during 4 years for one of the best basketball professors in NCAA, something that will guarantee him a great pro career. He is a complete shooting guard, powerful and a master in the catch & shoot. An outstanding lefty.

JOCK LANDALE - C - 2.10m - ST. MARY'S GAELS: 21.1p 10.2r - PIT: 11.3p 10.3r
Jock has been a key player in Saint Mary's and because of him, the Gaels have been a legit Gonzaga contender in the West Coast Conference last seasons. He is a life insurance. The aussie physical skills are not the best for the NBA but in the other hand, he'd be a difference maker in Europe. He struggled scoring in the PIT though. Mostly after enjoying him playing for the Gaels, showing a neverending skills close to the rim. He finished among Top 5 best rebounders of the Tournament. It calls powerfully the attention his yield when he is close to the basket averaging 65% in field goals during his Senior season in Modesto. Very skilled with the ball and rebound hunger. It would not be weird if a big team in Europe gives him a chance next season as a NCAA Rookie, first one as a pro. Now, he is trying to impress the Utah Jazz coaching staff as he's been invited to the franchise pre-draft workouts.

He was born in The Bronx, but that last name tells this Pirates small forward is Latin. Actually, his mom's family was from Dominican Republic. He has just duplicated his stats comparing his numbers in the PIT and his numbers as a Senior at Seton Hall, where he, and his teammate, another Latin such as Ángel Delgado, made one of the best duos in NCAA Basketball and a headache for whatever rival.

Lefty small forward, able to create his own shoots, threat from long distance, or finishing driving to the rim. He is also able to finish 2nd options as he always follows his teammates plays. He is outstanding in blocking timing, and actually, regardless his size and position, he was one of the best blockers in the PIT.

He is among a few players who were able to be close to the best scoring machine this season in NCAA, Oklahoma Sooners Trae Young. Second best scorer in the country this season in his last and lonely season for the Golden Grizzlies, university that is characterized for having legit scorers as we could see 2 seasons ago (16/17) when Marcus Keene averaged 30 points per game and this season, Keene has started his pro career in Italy's 2nd Division.

Nunn got to Oakland after 3 seasons in Illinois Fighting Illini, in Champaign, where he was just able to play 1 year. He just played 1 single season for the University in the State of Michigan but he has left his mark. Another magic left hand, he was the best scorer in the PIT, mostly playing what he does awesome: playing without the ball in his hands receiving screens to catch and read.

Another player who has exponentially increased his hype improving the numbers averaged during regular season playing for the university in the State of Ohio. Another example of a player who has been playing for a high intensity  defense, key in Cincy success this last seasons. But in the PIT, a complete different scenario, he was able to show his offensive skills, almost unknown so far.

He signed double-double in points and rebounds in the PIT, Top10 in scoring, and Top5 in rebounds. Outstanding margin of improvement of this Power-Forward who just become a desired sweet for European Scouts. The Minnesota native Player started to play college basketball in North Carolina State where he stayed as a freshman and sophomore but he was not able to bright so he transferred to Cincinnati Bearcats where he just signed 2 solid seasons and making sure a good professional career.

Since he arrived to Fairfield he shown a huge scoring talent, becoming one of the best newcomers of his conference. Since then, he's been growing, blooming, and improving his stats every single season, mostly in the offensive side, where he is an unbelievable scorer, one of the best in the country. It calls the attention he is lethal from the free throw line, averaging 87.2% in the 4 collegiate seasons. Besides his offensive skills, he is also good at playing without the ball and reading the game. A perfect fit for FEB Leagues, good hand, competitive on defense, always willing to improve, and a legit Clutch Player.

He is a winning bet for whatever european team who wants points.

Another player who has revalued himself after playing the PIT: he finished the tournament as one of the best scorers. Complete and versatile forward and an outstanding and powerful physical shape. Good three point shooter but also has expertise finishing second options from teammates plays, getting first the offensive rebound, and then, efficiently scoring. Able to run and finishing the fastbreak. Offensively he has increased his hype in Portsmouth and his performance has payed off as he's been invited by Denver Nuggets to the pre-draft workouts. Also invited to the NBA Combine.

One of the most desired jewels by the European Scouts. One of the most athletic physiques not just in the Portsmouth Invitational Tournament but also in the collegiate league. He actually spends a lot of time over the rim. Outstanding and efficient finisher, he does not doubt close to the rim and that's why most of his points are dunks. He is limited for the NBA because he is undersized for his position. Also able to finish after dribbling. Having this player in your team, makes sure you are going to have entertainment. He's been great playing for Virginia Commonwealth and also did great in the PIT as one of the best scorers and rebounders.

Yante is a force of nature. He was selected among the best players in one of the Big Conferences, the Southeastern Conference (SEC), and since he was sophomore we could see a huge NCAA career. And actually, he has not disappointed. He is very efficient close to the rim, and actually, it's very difficult to stop him in the paint. He also has a pretty decent mid-range jumpshot and able to catch & shoot, or shoot after dribbling. So he is very efficient playing Pick & Roll, but also playing the Pop option. Very strong player and he developed and improved his game in 4 years playing for the Bulldogs. Actually, as a freshman he didn't even look at the basket from the three point line, and now he shoots 3 threes per game with a decent average.

Maten is one of the four players from the PIT who have been invited to the NBA Draft Combine.

We've seen this type of player succeeding in Europe year after year. Undersized post player who does not look to have a lot of skills and with a non-athletic profile, but more talented than he looks like to have. Excelente playing facing the rim with the ball in his hands, and surprisingly, not just close to the rim. He is pretty solid when he is far from the rim either dribbling or shooting. He is able to generate his own shoots, ability to finish either using baby hooks or jumpshots. Though player, he does not hesitate in the man to man one on one, using contact and his strong body because he has very good body-balance. He is also skilled when he has the ball in his hands close to the rim, able to fake and dribbling efficiently to finish. He has a huge sete of offensive skills that replace his lack of height.