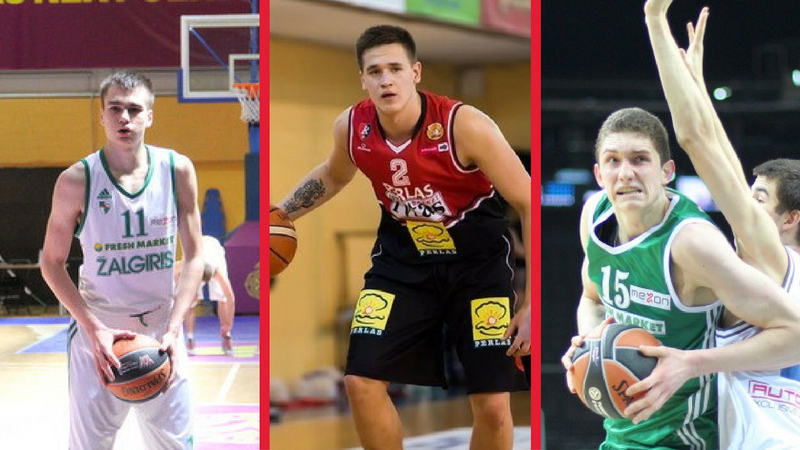 NKL – is the 2nd league of Lithuania. There is a perfectleague to start careers for young players. Almost all Lithuania‘s stars areplayed in this tier (like J. Valančiūnas, D. Motiejūnas & others).

In this article I will introduce 3 best young players inthis NKL season.

Son of Tomas Masiulis, who is Žalgiris-2 coach, shows that good genes (his father also was aprofessional player – 1999 won the EL trophie, 2000 won bronze in Olympic) and hard work lets to be one of the best young players in Lithuania. Last season Masiulis was not the first option in Ž-2 game schemas but this season when few players left Ž-2 and moved to higher level Masiulis had a chance to show his potential. To compare with last season Masiulis improved his stats incredibly 5,8pts -> 20,7pts; 3,4rbs -> 8,6rbs; 27,7% 3pts -> 603pts, by the way, these numbers are after 10 games (Masiulis missed 2 games due to ankle injury) but it is not possible not to charm his game. This season Masiulis does almost everything: calm 3pts shots, solid play in the paint in the both sides, aggresive play (6,6 fouls drawn per game). Masiulis has absolute trust in team and is not afraid of any older players in this league. Masiulis is 1st according points, 2nd in rebounds and 1st in PIR ranking.  All in all, Masiulis set new league all time record in PIR in single game 42pts,15rbs and 55 eff – against one of the best team in the league (Rasai).

Last season Normantas had a solid role in Perlas (10,4pts, 3ast and 9,1eff). But what Normantas does this season shows, that this guy has a bright future. He holds Perlas attacks in his hands (17,7 points, 4,3rbs, 4ast, 3stls and 18,8 eff). Very confident player, not afraid of missing any shots. Average of 3 steals shows that Normantas has very big IQ in defence and are good at fast breaks either starting it or finishing it. Normantas is also effective in offensive, his 1st step let to choose any option of the continue of the attack – can finish himself, can assist or quick set back & shot from mid-range or 3pt zone. Perlas‘ captain is one of the key of successful start of Perlas season. Perlas unexpectedly has  9/3 and takes 2-4 place. Normantas is 2nd according points, 14th in assists and 7th in PIR ranking. Also, Lietuvos Ryas registered Normantas to EuroCup roster what shows that team sees potential in Norman's.

One more prospect in Žalgiris-2 team. Like 2 colleagues mentioned above him, Birutis also improved his stats rapidly (8,1pts -> 17,5pts; 6,3rbs ->8,6rbs; 11,2eff -> 24,9eff). Birutis became solid starting player (100% games in Start5). Very long hands and solid height are the biggest advantage of this guy. He has "soft" shot from the paint, able to shoot "hook" or "semi-hook" shots and his 2pts shots percantage is very high (71% - 3rd according percantage, 1st in made 2 points shots). In defence Birutis hassome issues when meets stronger opponents than he, but his long hands helps him to block or disturb shots. Birutis is 3rd according to points, 1st in rebounds and 2nd in PIR ranking. P.S Yes, these 3 young guys arespotted in TOP 3 in all league according points!

Stats are given after 12 games.